You are here: BC Travel -> Things To Do in BC -> BC Parks -> Vancouver Island and Gulf Islands -> Newcastle Island Marine 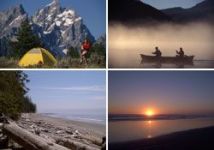 Newcastle Island became a Provincial Marine Park in 1961, when the nearby city of Nanaimo granted it to the province after having acquired the island from the Canadian Pacific Railway in 1955. Situated in Nanaimo Harbour within site of both Vancouver Island and the towering Coastal Mountains of the Lower Mainland, Newcastle Island possesses a rich natural and cultural history that makes it one of the most intriguing provincial parks in British Columbia. The island's shoreline is dominated by steep sandstone cliffs and ledges that are punctuated by sandy gravel beaches. Caves and caverns abound along the shoreline, providing an appealing contrast to the undulating upland that is studded with Douglas-fir, arbutus, Garry oak and dogwood trees.
Location:

Newcastle Island is available only by boat. Once you've reached Nanaimo (mainland visitors can ferry over via Horseshoe Bay), take the foot passenger ferry for the 10 minute ride from Maffeo-Sutton Park behind the Civic Arena, just north of downtown Nanaimo on the Island Highway. Boat owners can simply tie up to the wharf at the entrance to Mark Bay. Berthing facilities for more than 50 boats are available at the island.