You are here: BC Travel -> BC Destinations -> Vancouver Island and Gulf Islands -> Campbell River 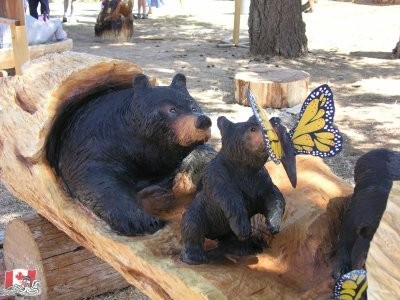 On July 1 (Canada Day), 1996, well-known local artist Max Chickite stood working on an old stump that had been on the beach for many years. After 10 hours, a remarkable octopus appeared from the wood and "Octy" was born. Octy was a gift to the city from Max.

A few days later, vandals cut off the Octopus' head and stole it, but it was found 11 days later on a logging road. Max repaired the charred, damaged head and returned it to Octy's body.

The vandalism caused furor and is the reason the Driftwood-Carving Competition was started. We felt that since a city could be so upset about the damage to 1 carving, it would surely appreciate a city filled with carvings.