You are here: BC Travel -> BC Destinations -> Vancouver Island and Gulf Islands -> Cowichan Valley -> Duncan 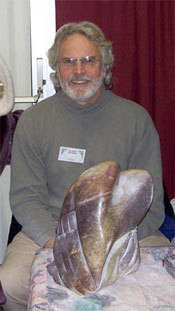 Douglas started his training at the University of B.C., where he received an Arts/Sciences degree in 1969. He thereafter explored the techniques of watercolour, pen and ink, and charcoal. He first began experimenting with soapstone carving in 1975, and later worked with wood, clay, bronze, and iron. His love of stone began when he built a huge stone fireplace in his log home in Salmon Arm, B.C.

In 1981 he returned to U.B.C. to study Industrial Arts teaching, taking courses in design, drafting, woodwork, metalwork, and sculpture. This was followed with a period of primarily doing ornamental ironwork and metal sculpture. In 2002 he returned to stone carving, and continues with it today.