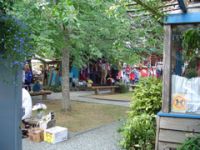 Only a hop, skip and jump away, literally!
Experience the West Coast tradition of Island hopping. All island hopping trips generally include a stop-over on Hornby Island. The popular weekend or vacation experience of getting to see all the wonderful islands often occurs with trips starting on Vancouver Island. Horby is accessed from Vancouver Island by vehicle ferry to Denman Island and then a second vehicle ferry to reach Hornby’s remote camping, retreats and peaceful, bucolic island!

Cratered sandstone shores, black soil and soft white beaches backed by ravishing green forests stand out in memory from high up on a hiking trail.

The attitude is here is to preserve. To want not, waste not. Back to grassroots, traditional farming and proper use of the land. Few residents toil or stress. Much effort is put into family, arts, culture, land caretaking and the four seasons. Inspired Hand made soaps, wooden carvings, and coastal paintings adorn the local shops and studios.

Getting to the root of life, means experiencing a well-deserved retreat to Hornby Island!

Travel note: Most visitors arrive by car using the BC Ferry system. Hornby Island can also be reached by floatplane from the mainland or watertaxi from other surrounding islands.

History:
The Coast Salish First Nation populated much of the West Coast shores for over 5,000 years. Hornby was the territory of the Pentlatch tribe. They made their home here for nearly nine months out of the year. The annual hunting and collecting trips that provided food sources of fish and berries in other areas around the islands (ei. Seasonal harvest and salmon runs) caused the families to live semi-nomadic lifestyles. Hunting, fishing, carving, collecting, family, spirit and traditional rituals were much apart of their daily living.

Almost all Pentlatch disappeared after the arrival of the white explores in the late 1700’s. The Spaniards arrived in 1791 A.D., naming the island “Isla de Lerena”. However, the British who were predominantly settling in the area by 1850 elected to brand the island with the name Hornby Island.

Since, the island has been infrequently populated by whalers, farmers, American's escaping the Vietnam War draft, and today is under the close watch and preservation by the residents and artists, who call Hornby home.


Hornby Island Things to Do