You are here: BC Travel -> BC Destinations -> Northern BC -> Prince George 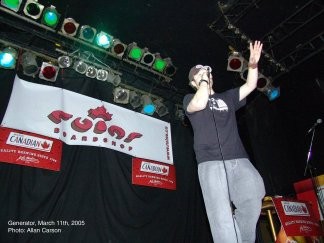 Producer, MC, DJ, and instrumentalist Shae Morin began writing, recording and performing under the name Versus. He started a studio/indy label called Versus Projects. Dopeness ensued... EXCERPT FROM VERSUS' WRITE UP FOR THE UNDER THE VOLCANO MUSIC FESTIVAL IN VANCOUVER BC... "His live show combines high energy and a kinetic connection to the audience, borne out of his underground sensibilities and his deep commitment to youth. He has released 2 albums of original material, and recently participated in the 2.8 collaboratory project at Vancouver Folk Festival, lending his break-beat drumming, bass playing, and mic-gripping to the sonic stew. Versus is by far one of the most interesting, ethically-sound & talented MC's to emerge from the new wave of talents in Canada and he?l go on to make important contributions to the hip hop community."