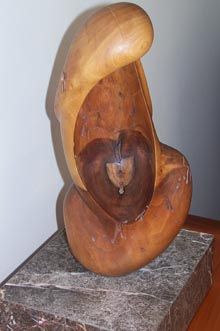 Many years ago, my grandfather asked me to cut down his walnut tree (to keep him from falling off his garage for the second time while picking his crop). I saved the section of the trunk with the graft between Black and English walnut, and carved this piece from it. The basic form came to me in a dream, and in a second dream a week later, I realized without understanding anything about it that the form touched me deeply. Carving Anima was a several-month meditation on the feelings that it conjured. At one point I took my dream (the emerging sculpture) to a weekly session of âthe dream groupâ, a group of friends who habitually recorded their dreams and analyzed them together. During that session, I realized that the sculpture manifests an important idea of the Swiss psychologist Carl Jung. In Jungâs theory, in addition to each adult humanâs dominant sexual consciousness (in my case it is male), each of us also has an emerging, faceless consciousness of the opposite sex (called Anima for males and Animus for females). According to Jung, we can live deeply fulfilling lives only to the extent that we integrate those competing aspects and allow them to express themselves directly in the way we live. The time spent carving Anima was a meditation and therapy that facilitated the emergence of my anima and its integration into the rest of my life. Since then, I have carved two more sculptures of the same name, one in marble and the other in pink alabaster, and both much larger than the first. Both of the stone pieces are in private collections, and I kept the walnut Anima in my own collection. 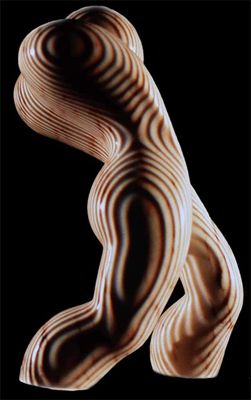 This sculpture, actually called Dream Person Emerging, is the second in a series of (now three) sculptures of the same name, each of them exploring something that I donât yet understand about the role of that basic posture in my life. To me, the posture expresses a combination of physical power, centred balance, alertness, and openness to experience, and I meditate again and again on this combination as I work. The first Dream Person (private collection) came to me literally in a dream; hence the name. In my dream, the form tumbled slowly in space, allowing me to see all sides of it. I awoke, sketched the basic form, and returned to dream it again. In the morning, I modeled it in plasticine, then began to carve it in teak. I carved Dream Person Emerging in marble a few years later at twice the size, and added âemergingâ to the name because the larger scale allowed me to make more of the anatomy explicit rather than merely suggestive. I am now carving the third Dream Person in purple granite, at twice the scale of the second. One more doubling in size will bring the form to human scale and I intend to carve it. Creating this series has been such a powerfully transforming experience for me that I have named my studio and business after it - - Dream Person Studios.

The lines in this image are not part of the stone. They are produced by a technique of lighting that I use to help me visualize and evaluate three dimensional forms. In this case, I projected a regularly repeating grid of straight black and white lines onto the piece, making a topographic map of it. 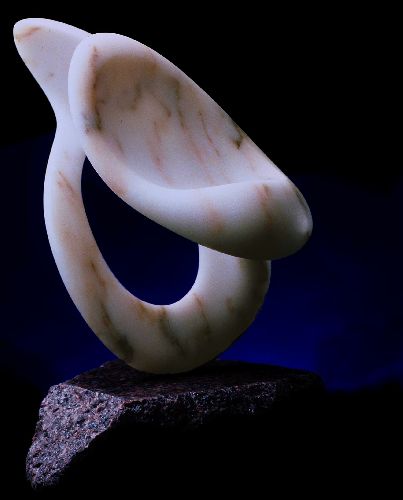 I developed this sculpture during a year when my daughter Susan was studying and performing classical ballet. It is an exploration of motion and balance, a meditation on human potential, and a gift for a beautiful person.

This sculpture is a meditation on the experience of being in love. Its form is an approach to the endlessness of the Mobius strip, without being repetitious or cyclic. 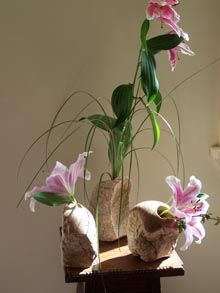 Since moving to Quadra Island in 2004, I began to create small, elegant, carved stone vases, many of them in red granite from Cortes Island. Each vase begins as a rough stone from the beach and is only partly carved and polished, with the effect that the completed form exists in stark contrast between natural complexity and human-imposed simplicity.