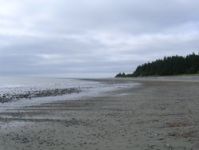 Folklores of the First Nations families that first lived on Graham Island named the area Tlell, "land of berries" or "place of big surf", both are true. The area is abundant with wildlife, dense forest growth, and beautiful shore lines.

Since fishing and farming were the traditional economy bread winners over one hundred years ago, visitors can expect to find farmsteads and fishing villages on the island still today. One of the oldest farmsteads in the Queen Charlotte Islands is still in operation.

Tlell is home to numerous artists and their studios can be located on route by blue road signs. Certain First Nations artists are included in the number of artists/medium available on the island. Expect that most artists will welcome visitors during normal business hours.

As the heart of the island's bustling lifestyle, Tlell's quaint setting, little streets and an array of shops and galleries are inviting. Walks along the shore side, beach combing and hiking the forest trails are wonderful ways to spot wildlife on land and in the air. There is much to explore!

When arriving at the Skidgate ferry terminal, Tlell is only 43 kilometers north.

History:
Most of the Queen Charlotte Islands were in habited over 5,000 years ago either by First Nations who established tribe lands or who seasonally journeyed the coast line for food sources. Their legends say that these areas were abundant with wild berries and vegetation. As well, that the seas were plentiful with fish and sea life, which supported their existence. Tlell was the original home of the Haida fishing camp.

It was these same principal sources that brought white settlers in the 1900's. In 1904, the Mexican Tom became the first non-native to establish residence on Graham Island and he build a homestead and ranch. Soon more settlers grew interested in making the island home, especially after the gold rush ran dry mid-century.