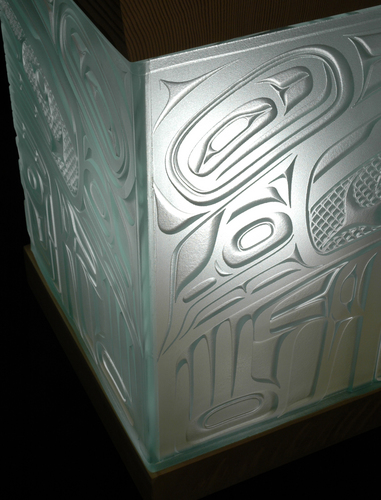 Alano Edzerza, a promising Tahltan artist, has been involved in artistic endeavors since a young age, receiving an award for sculpture from the Victoria, BC School Board at the age of 13.

He started learning about Northwest Coast art from his family; in particular, from Terrence Campbell. In 2002, Alano attended school in Arizona under the instruction of Rick Charlie. He has worked with artists Jay Simeon, Marcel Russ, Phil Gray, Corey Bulpitt, Beau Dick, Mark Preston and Dempsey Bob.

As of late, Alano has been working with glass and experimenting with this medium. Alano Edzerza has been featured in 7 major shows In October of 2007, Alano had his first solo show at Stonington Gallery in Seattle, where he featured new pieces in glass, jewelry, stone, steel and limited edition prints.

Alano has also recently completed three twelve by four foot installations in the medium of steel for one building, and is currently working with two other large building projects.