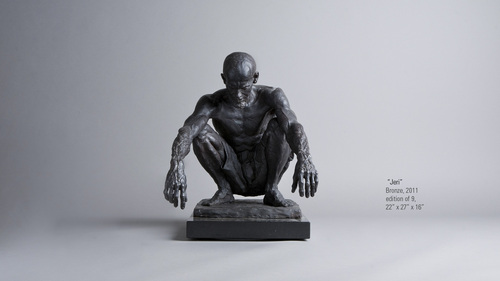 All artists are observers of life, though itâs not every day you encounter an artist who has the official title of âcreature supervisor.â But that is indeed the hat most often worn by Vancouver artist James Stewart, who created the lead character in The Chronicles of Narnia, and was responsible for creating the giant, prawn-like aliens in District 9.

Stewartâs successful career in the film industry has taken him to over 45 countries spanning four continents. Also an accomplished photographer, he has rigorously documented his travels and the thousands of lives that have touched his. These experiences find their way into his artwork. Most recently, he has returned home to create âPangea,â a series of beautiful and life-like bronze sculptures.

Pangea is the term for Earthâs landmass before it shifted to the continents we know today. It refers to a time when everything was together and connected. Stewartâs imagination is fuelled by his interest in other cultures, and his over-arching vision with this series, which is that our common roots speak about how we all remain connected. He maintains that connection can be seen clearly, even in our diverse cultures, if our observation is close and careful enough.

Stewartâs work, which is highly realistic and traditional, is also strikingly contemporary in how it is created. He imbues his figures with the subtlety of gesture, which brings them alive. While very familiar with working from a live model, Stewart created these works by referring to the exhaustive photographic records he takes while travelling. Working in front a large video screen and using multiple images, he re-creates his experiences in oil-based clay. He has been compared to a photojournalist who is reporting in 3-D.

Using the âcire perdue,â or lost wax method, Stewart works with the finest foundry, Artworks, to fabricate the bronze. This technique dates back to ancient Greece and was used by such renowned artists as Bernini and Rodin. The completed piece is then used to make a mould, which is used in the casting of the bronze artwork. Upon completion of the edition the artist will supervise the destruction of the mould.

Stewartâs incredible eye for detail (the kind most artists dream about) allows the viewer to enter his original experience. Looking at his sculptures induces an almost voyeuristic feeling. The eye can freely linger over intimate details -- knock-kneed legs, poor teeth, wrinkled clothes, etc. -- in a way that in real life would constitute staring. Here, itâs just close observation, a practice the artist would like to wholeheartedly encourage.