You are here: BC Travel -> Things To Do in BC -> BC Attractions -> Northern BC -> Haida Heritage Centre at Kaay Llnagaay 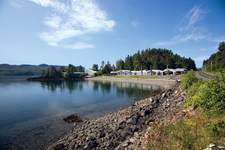 The Haida Heritage Centre opened to the public in July of 2007 for its "Soft Opening Preview Season". The official Grand Opening Ceremony took place on Saturday, August 23rd, 2008.