You are here: BC Travel -> BC Destinations -> Vancouver Island and Gulf Islands -> Cowichan Valley -> Mill Bay 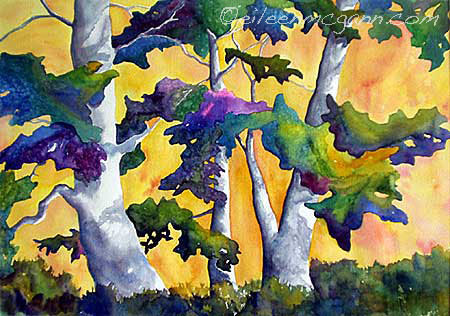 West Coast artist Eileen McGann has lived and painted across Canada and Great Britain. Born in Ontario, McGann spent summers from childhood to adulthood in the northern woods, camping and canoeing in Algonquin, Temagami and Sioux Lookout. These experiences and a deep connection to trees and to wilderness have informed both her songwriting and her painting ever since. In between completing four university degrees in different disciplines, McGann began her career as a performing artist. She has since released six solo CDs, and garnered grants and awards from Canada Council, FACTOR, SOCAN, External Affairs Canada, the AFA, and a 2002 Juno Award nomination for her CD "Beyond The Storm", which also features one of her pastel paintings on the cover. After almost ten years living in Calgary, Alberta in the foothills of the Canadian Rockies, she moved to Vancouver Island in 1999 and lives and paints there on Canada's Pacific coast.

As a painter, she is always drawn to the wild places of her homeland, especially the boreal and coastal forests and the rugged mountains of western Canada. Her mediums include watercolour, acrylic, graphite and pastel. McGann has studied at the Victoria College of Art, as well as with painters Gregg Johnson and Tom Lynch. Her paintings are notable for their intense and beautiful colour, and not-quite realist representations of the trees, mountains, lakes and oceans of this country.