HISTORY OF THE BAND
The 5th(BC) Field Regiment Band of the Royal Canadian Artillery is the oldest military band organization in western Canada. It traces its origins to 1864 as the Band of the Victoria Volunteer Rifle Corps.

The Band became associated with the Artillery in 1878 when an Artillery Battery was established in Victoria and officially became the Band of the Regiment of Garrison Artillery on Nov. 9 1883, eventually becoming the Band of the Fifth BC Regiment in 1896. During 1890's the 5th BC Regiment band was authorized to wear its distinctive navy blue Royal Marine pattern uniform and continues to wear that style uniform today.

The Band has been an integral part of the musical and cultural history of Victoria since its formation, giving public concerts in each year of its existence. The Band has also been involved in the first (and subsequent) opening of the British Columbia Legislature, and has been part of the honour guard for visiting dignitaries as well as performing at military and state functions.
During the 1920's a string section was added to the band. This group became very active within the community and members from the string section later became the nucleus of the Victoria Symphony Orchestra. 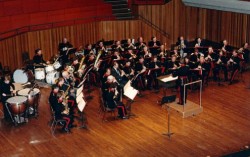 The 5th(BC) Field Regiment Band is a Canadian Forces Reserve Force Military Band with an authorized strength of 35 members and is the Army's resident military band in the provincial capital of Victoria. The band operates as a concert band and a parade band, it also breaks down into smaller ensembles such as the dinner group and brass and woodwind quintets which provide music for military and state functions as well as public performances.

During August the band performs every Sunday afternoon from 2:00 - 4:00 pm at Fort Rodd National Historic Park. This extremely popular series of concerts takes place at the site where 5th(BC) Field Regiment manned the gun emplacements. The band will be entering its 12th season at Fort Rodd in 2001.

In addition to these concerts, the band performs for the public each spring and fall at various venues throughout Greater Victoria and Vancouver Island, as well as, performs for Canada Day Celebrations, and for BC Day celebrations at the Lt. Governor's residence.

The 5th(BC) Field Regiment Band also participates in the Regimental Tattoo held every second year in November, on the Saturday preceding Remembrance Day (Nov 11) at the Bay St Armoury. The band also performs at the Canadian Scottish Regiment's annual Ceilidh each March as well as taking part in various parades on Vancouver Island, including the Remembrance Day ceremonies and Victoria Day parades.

Individuals wishing to join the band, either as Reserve Force musicians or as civilian associate members, are encouraged to visit with us in Rm 308 Bay Street Armoury, 715 Bay St. Victoria BC.